The Open University, at the ‘Polytechnical Institute for the Study of the Expanding Field of Radical Urban Life’, Archway, London. 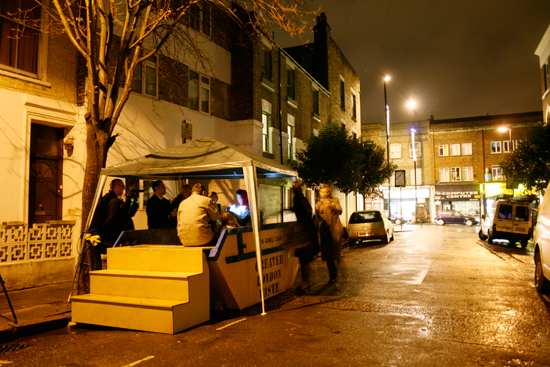 The Open University was first realised for Ruth Maclennan’s Polytechnical Institute for the Study of the Expanding Field of Radical Urban Life (presented in association with AIR and Byam Shaw School of Art). The thrust of the piece reflected the central conceit of Ruth’s ambitious project involving six visiting professors and a provisional institute. For Maclennan’s event I introduced the evening with references to Professors Marvel and Brisley – Stuart Brisley was my own professor, and of course Professor Marvel was both the Wizard of Oz and the man behind the curtain. I wanted to reflect the hoaxishness of being made a professor for a day. One of the other participants, Richard Wentworth, was/is a real professor, but I am not.

Each of the invited speakers prepared a short lecture on the what should or should not be trashed theme:

• Composer and artist Jem Finer trashed the banality of ringtones, and proposed that improved consideration of this matter would enhance the sonic experience of everyday life, creating harmony where there is discord.*

• Photographer and Loyolan scholar Tim Wainwright reminded us of love and, while avoiding the name of Jesus, gave a lecture entirely religious and spiritual in content, offering his transfixed audience an outline of the simple and thoughtful Loyolan exercises.

• Artist and model Elena Poka spoke of the importance of the often trashed idea of glamour. Again, the gathered audience was riveted, as on the coldest of nights the beautiful Elena stripped down to the barest of outfits to deliver her message.

• Artist Alex Hidalgo delivered a lecture about the place of the worker and the trashing of the human element in the all-consuming age of digital imagery and animation.

• Robin Banerji, known for his Middle East reportage, considered the tyranny of the eight-hour ‘good night’s sleep’, and recommended trashing this ideal in favour of the more flexible approach of a round-the-clock catnap schedule.

The skip was open and passers-by were encouraged to take part. A very spirited indictment of the Kafkaesque bureaucracy of Islington Council was provided by a local, elderly Irish woman, and met with cheers from all present. There were other speakers and impromptu contributions from audience members.

>> Department of Political and Social Recovery