The Horse is a Noble Animal, Tatton Park Biennale 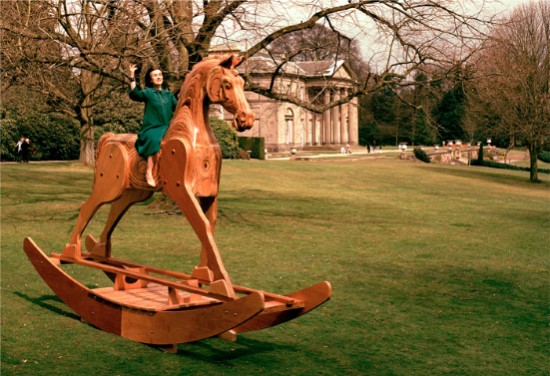 Excerpt from catalogue essay by M.F.

The rocking horse is the hobby horse of great houses. There is a beautiful black one in the house at Tatton Park, which I saw out of the corner of my eye and which worked its way into the back of my mind. The horse has a permanent place in the English psyche, and is at home in the grounds of such houses. It is a regular feature in the imagery of English absurdism, the bestial conveyance of big bronze generals, backward knights and Colonel Blimps. It also holds a very particular place in the mind of the young female rider, though a single triumph in a donkey derby is as close as I myself ever came to that sort of thing.

The rocking horse in the house touched a nerve for me – something to do with being at once both a guest and a guide in a psychological landscape where one does not necessarily belong. The rocking horse is the site of a stationary tour, and from its back one sees things one cannot, should not and would not otherwise see. But it is typically an indoor creature, a nursery-sized beast with congenital physical limitations. So this summer a certain horse-sized horse will be grazing at Tatton Park, and, from time to time, I will be riding it across the hills and dales, through the fields and glades, over streams and rose gardens. I intend to speak from astride it.

The work is titled after something my grandmother reportedly used to say when she wished to put a stop to unseemly talk at her table: ‘The Horse is a Noble Animal’. 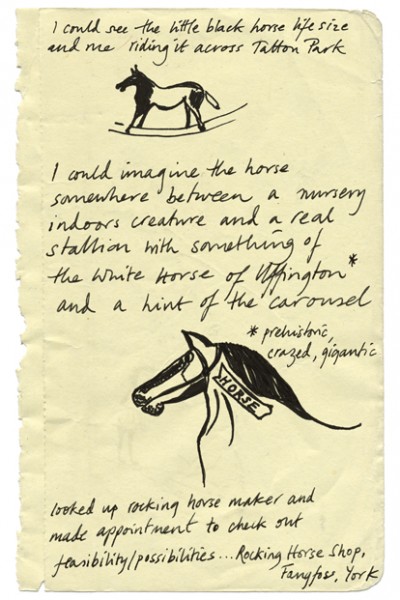 Pages from the artist's notebook

Answers to questions posed by Eleanor Powell (of Tatton Park)

1. By delivering a plummy-voiced address from astride the big horse, my hope is that different aspects of English absurdity, from centuries of horse-play, as well as the many class connotations of both rocking horses and real horses, will come through with both playfulness and serious humour, and by both visual and verbal means. There is a very particular English absurdity and surrealism apparent in works such as Alice in Wonderland, and I hope that a certain size and scale play in the landscape garden can make resonant memories from literature come alive.

2.  As I’ve already told, I was initially inspired by a little rocking horse under a great tree in Tatton Park house, when I came up on a site visit around Christmas time. My work often involves me working alongside a specially constructed sculptural object (for instance, a giant life-size Punch & Judy booth in The Cabinet of Horribly Violent Glove Puppets) , which I sometimes make myself and occasionally delegate. In this case it was important to have a master craftsman construct the outsize rocking horse, so that it would bear all the traces of such a craft, and not be in any sense an approximation. The aspect of the work which I have identified as being something of a ‘stationary tour’ connects and resonates with much of my other work, where I perform the role of an ‘outsider’ tour guide, showing the way through a place or a subject in which I am myself a visitor. These have taken place in cities, stately homes, leisure centres, hotels, shopping trips – see ‘Walking Talking Living Yarn’ (King’s Cross, London), ‘The Hole in the Ground Tour’ (Nottingham), ‘The Dangerous to Know Society’ (Lord Byron’s house, Newstead Abbey), ‘The Behind Closed Doors Tour’ (Great Eastern Hotel, London).

3.  There is an immediate challenge concerned with mounting and dismounting my high horse. It requires considerable focus and courage, as I am in fact terrified of heights. I am not particularly agile either, so there have been some quite comical scenes where I have been attended by at least three ‘grooms’ and been talked down with great patience. I have managed to shoo away the audience before ‘de-mystifying’ the work – except on the occasion of my last ride, when a determined group of spectators waited under a big tree for the duration of my nervous descent, and when I had arrived back on the ground there was a huge cheer from them, one of whom told me it was definitely the best bit of the show!