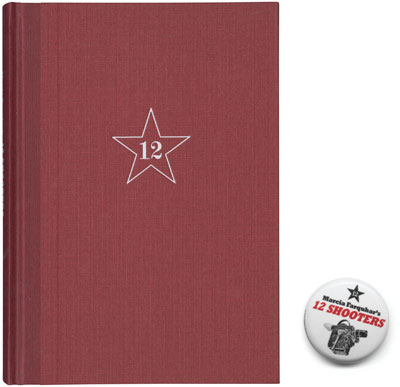 “The 12 Shooters book will be of enduring value to generations of artists fortunate enough to get hold of a copy. Entertaining and scholarly, 12 Shooters dismantles the form of most publications that document a distinguished artist’s practice, and elucidates the ways in which a once-only conceptual performance might haunt and possess an entirely new body of work. In this sense, 12 Shooters is also a conceptual biography, an intimate conversation between the artist and those who have been invited to re-imagine the secrets and pleasures of her performing persona.

Most dazzling of all, 12 Shooters succeeds in being a critically engaging archive that is on-side with the stray thoughts and unexpected philosophical conundrums of everyday lived experience that have always been Farquhar’s subject”. Deborah Levy, July 2009

Designed by the Fraser Muggeridge Studio Please do not bend