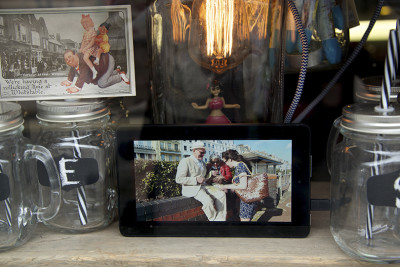 A film screened at Sundae Sundae the ice cream shop for the duration of the biennale was based on a true story of an unwanted green ice cream from my early life in Felixstowe. A silent movie stars myself aka the artist as one half of ‘the unknown couple’, with the male half played by legendary artist and filmmaker Andrew Kötting. My daughter, artist Kitty Finer, appears as my mother. The film is approx 1 minute long and played continuously in the shop window alongside the still postcard.
On the first day of the Biennale i was joined for a live performance by the iScreamers a band for the day.