See the paintings on the Sir John Soane’s Museum website 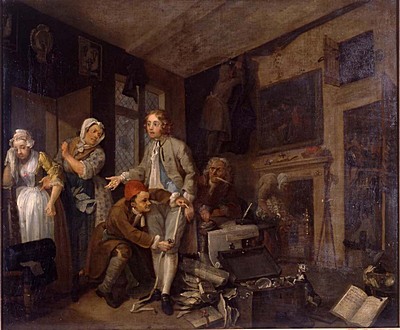 The Soane Audioguide Project is a collage constituted by the commentaries of a series of sound, performance and visual artists, art and architecture theorists, and philosophers. These sonic fragments form a puzzle which replicates the arrangement of the museum. The audioguide, in the same way that the museum, imposes no fixed order. Historicism, story-telling, and mythology are explored via subjective and well informed perceptions. The sonic format is ephemeral, which is why it relies upon memory and representation and, as Derrida wrote in Memoirs of the Blind: ‘Perception belongs to recollection’.

The purpose of this project is to suggest an accompanied tour for which each visitor download the tracks from this website to their MP3 players, and take them to the museum.

Sir John Soane (1753-1837) spent over 40 years creating his house and Museum at Lincoln’s Inn Fields, London, building three successive houses. Unlike other House Museums, the Sir John Soane’s Museum was assembled and arranged as a museum by Sir John Soane himself. A few years before his death he negotiated an Act of Parliament to preserve his house and collection after his death and open it as a public Museum. He left strict instructions that the house should be left ‘as near as possible to the state in which he left it’. A few days after his death the first visitors were admitted to his Museum which has since remained frozen in time according to Soane’s wishes. During his life Soane, a prestigious neo-classical architect, collected widely, assembling a spectacular collection of art, books, architectural drawings and models as well as a large selection of fragments and casts from Greek and Roman antiquity, and also plaster casts of demolished buildings of his own time. He displayed these fragments with no linear regard for their chronology or authenticity. Now, all these bits and pieces are enmeshed in a tight pattern that seems to flatten out time while at the same time being very aware of it.