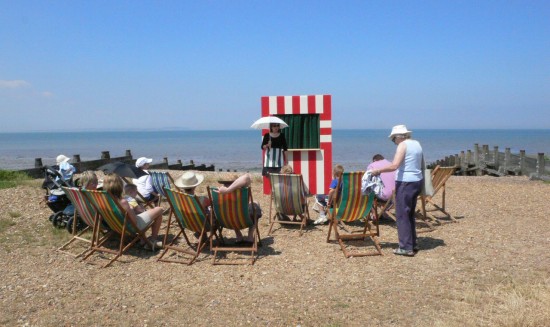 The Cabinet of Horribly Violent Glove Puppets project required indepth research into the evolution of the Punch and Judy tradition, from its Commedia Dell’arte foundations, through its 19th Century heyday, to its present day incarnations. For the origins and background of the characters, a key text was Punch in the Italian Puppet Theatre by Michael Byrom (London: Centaur Press, 1983).

I also spent a great deal of time studying and cross-referencing published scripts from past Punch and Judy shows, beginning with the earliest printed version (JP Collier, 1827). The fluctuations in tone from the earliest scripts to the relatively innocuous ones of today proved fascinating. The script I wrote was culled predominantly from the older and more explicit sources, intercut with Brechtian interventions. For example, the crocodile (an Italian accented outsider who offers a running commentary on his own role) was based partly on Franko B, the critically acclaimed artist known for bleeding in his intense performances.

Amnesty International reports on violence against women, and James Twitchell’s Preposterous Violence: Fables of Aggression in Modern Culture (Oxford University Press, 1989) provided me with further impetus to write and perform this one-woman-show in an unabashedly violent way. There is no feminine triumph, as some previewers tried to suggest. My Punch is an amoral, comic villain. He was born out of the research, and his voice was learned from recordings of the beachside bastard and his famous swazzled yap.

More is to be found on the archive